Jump to Latest
GreenBeam
The all-new BMW iX1 is finally here and this press release covers a lot of what you need to know. 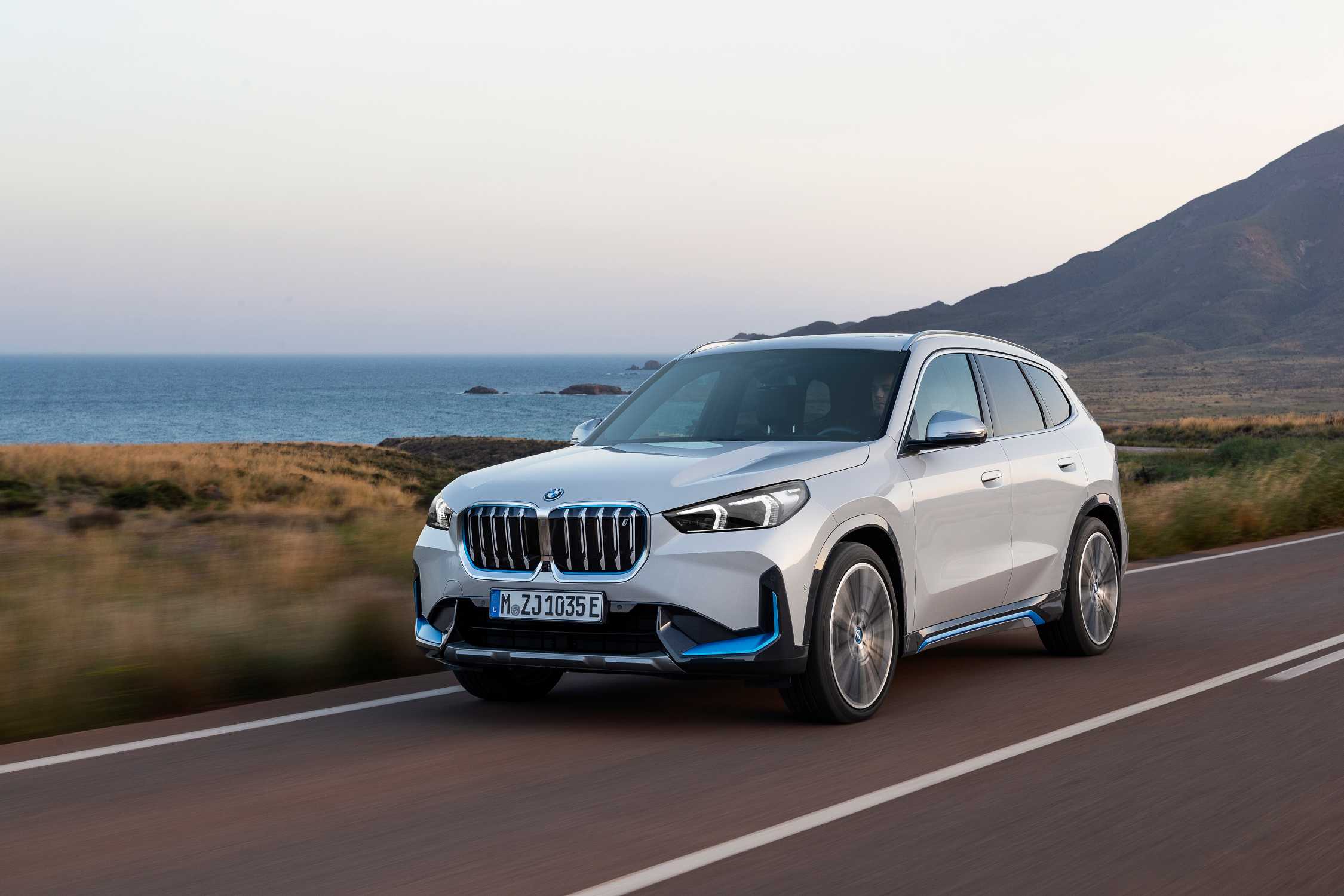 The all-new BMW X1 and the first-ever BMW iX1.

The entry model into the world of BMW X is now more appealing than ever. In its third model generation, the new BMW X1 boasts a more prominent design, superior spaciousness, advanced digitalisation – and, for the first time, an all-electric drive system. In the new BMW iX1, meanwhile, instantly...

The entry model into the world of BMW X is now more appealing than ever. In its third model generation, the new BMW X1 boasts a more prominent design, superior spaciousness, advanced digitalisation – and, for the first time, an all-electric drive system. In the new BMW iX1, meanwhile, instantly accessible driving pleasure and modern versatility are brought together with locally emission-free mobility. A new control/operation system with BMW Operating System 8 and BMW Curved Display plus a far wider selection of automated driving and parking systems also help to define the forward-looking character of this Sports Activity Vehicle (SAV) for the premium compact segment.


Munich. With its robust appearance and functional versatility, the new BMW X1 embodies an authentic experience of freedom and independence in day-to-day driving and on longer journeys. The interior’s progressive design and sophisticated ambience, and the much broader selection of standard equipment compared to the outgoing model, serve to underline its deeply embedded premium character.

At launch in October 2022, there will initially be a choice of two petrol and two diesel engines. These will link up with a seven-speed Steptronic transmission with double clutch as standard, and their drive power will be channelled to the road via either the front wheels or the BMW xDrive intelligent all-wheel-drive system, depending on the model. This starting quartet will immediately be followed by the all-electric BMW iX1 xDrive30 (electric power consumption, combined in the WLTP cycle: 18.4 – 17.3 kWh/100 km; CO2 emissions: 0 g/km; figures in NEDC cycle: –; estimates based on the car’s current development stage) as well as by a pair of plug-in hybrid models and another two conventionally powered variants with 48V mild hybrid technology. The new BMW X1 will be built at BMW Group Plant Regensburg, where models with combustion engines, plug-in hybrid systems and all-electric drive will all roll off a single assembly line for the first time.

The BMW iX1 will bring the experience of locally emission-free driving pleasure to a vehicle segment enjoying worldwide growth, making it accessible to a very wide target audience. The compact SAV powered by the latest BMW eDrive technology will therefore give a major boost to the accelerated ramp-up of electric mobility. The improvements in sustainability compared to the predecessor model can be partly attributed not just to the wide-ranging electrification measures, but also the increased use of green energy, both for production and in the supply chain, and the greater quantities of secondary raw materials and natural materials used.

The surface treatment, lines and classy exterior design details of the BMW X1 display its Sports Activity Vehicle identity more clearly than ever in its third model generation. Distinctive design features include the powerful proportions, almost square wheel arch contours and the signature BMW X model styling of the front and rear ends.

The upright front end of the new BMW X1 gives it a much greater sense of presence, with slim LED headlights, a large, almost square BMW kidney grille, X-shaped lines radiating out to the sides and eye-catching chrome strips in the lower air intake serving as its defining elements. Adaptive LED headlights with matrix high beam, pulsating turn indicators and variable light distribution are available as an option.

The robust aura of the new BMW X1 can be intensified to great effect with the specific design elements of the xLine model, which include stylistic underride protection. The M Sport model also offered as an alternative to base specification places the focus firmly on dynamic driving pleasure with features such as its large cooling air inlets.

All model variants come as standard with 17-inch light-alloy wheels. 18-inch light-alloy wheels are fitted on xLine and M Sport cars, although these models are also available with 19-inch and – in a first for the BMW X1 – 20‑inch wheels. Customers can choose from two solid and ten metallic shades for the exterior paint finish – including a Frozen paint option from BMW Individual for the first time.

A raised seating position and a progressive premium ambience styled on the BMW iX help to create a distinctive driving experience inside the compact SAV. The key elements of the cabin’s redesign are the slender instrument panel, the BMW Curved Display, the “floating” armrest with integral control panel and the smartphone tray with indirect illumination at the front of the centre console.

The newly developed seats are available with the option of both Sensatec perforated and Vernasca leather upholstery. Also to be found on the options list are sport seats, electric seat adjustment with memory function and lumbar support including massage function. Improvements have been made to both acoustic comfort and occupant protection. The integrated passive safety concept now also includes a new interaction airbag between the front seats.

The rear compartment of the new BMW X1 includes three full-sized seats offering a notable improvement in seating comfort. The 40 : 20 : 40 split rear seat backrests can be folded down or adjusted to a different angle to expand the boot capacity. The fore-and-aft adjustment of the rear seats available as an option for the purely combustion-engined models provides even greater versatility. Boot capacity can be increased from 540 to a maximum of 1,600 litres. The trailer tow hitch available to order as an option for the new BMW X1 is now operated electrically at the touch of a button.

The BMW Maps navigation system, a Sport leather steering wheel, intelligent two-zone automatic climate control and a rain sensor with automatic headlight activation all come as standard in the new generation of the BMW X1, as do four USB-C ports, two 12V power sockets and a far greater number of driver assistance systems compared with the outgoing model.

Restructured equipment packages enable targeted individualisation of the car. The premium character can be turned up another notch by optional features such as the mirror package, ambient lighting, panoramic glass sunroof and Harman Kardon Sound System.

BMW iX1: a new era of driving pleasure in the compact SAV begins.

The BMW iX1 xDrive30 is the first all-wheel-drive electric car introduced by the brand in the premium compact segment. Two highly integrated drive units at the front and rear axles deliver a combined output of 230 kW/313 hp (taking the temporary boost effect into account), and post overall torque of 494 Nm (364 lb-ft). The electric all-wheel-drive system ensures supreme traction and directional stability in all situations. The BMW iX1 xDrive30 completes the 0 to 100 km/h (62 mph) sprint in 5.7 seconds.

The fifth-generation BMW eDrive technology additionally comprises the car’s highly efficient charging technology, including the improved charging software also found in the BMW i7, and a high-voltage battery positioned flat within the vehicle’s underbody, whose high energy density gives the car a range of 413 – 438 kilometres (257 – 272 miles). (The figures relating to output, performance, energy consumption and range for the BMW iX1 xDrive30 are predicted values based on the car’s current stage of development.)

Fifth-generation BMW eDrive technology is also employed in the plug-in hybrid variants of the new BMW X1, which means significant advances over the preceding generation in terms of sporting prowess, efficiency and charging capacity. There has also been a substantial increase in electric range.

The new BMW X1 will be launched with a choice of conventional combustion engines featuring two petrol and two diesel units from the BMW Group’s new modular generation of Efficient Dynamics engines. Second-generation 48V mild hybrid technology with an electric motor integrated into the seven-speed Steptronic transmission is on hand to help boost both efficiency and power delivery in the two most powerful engines.

Irrespective of the drive system fitted, all new BMW X1 models offer well-resolved handling characteristics in any situation and deliver the driving experience for which the brand is renowned. The compact all-rounder’s sophisticated chassis technology produces a perfectly harmonious balance between sporty, agile handling on the one hand and long-distance comfort on the other. All the tools required here are provided by a body construction that reduces weight while increasing rigidity, a long wheelbase, wider tracks than the predecessor model, and targeted upgrades to the single-joint spring strut axle at the front and the three-link rear axle.

Near-actuator wheel slip limitation is fitted as standard in the new BMW X1, benefiting both traction and directional stability. Other new features include the integrated braking system and the extra, lift-related damping at the front axle. The optional adaptive M suspension features frequency-selective damping, sport steering and a 15-millimetre drop in ride height.

Wide variety of systems for automated driving and parking.

The technological advances made in the new BMW X1 compared with the outgoing model are also evident in the far greater variety of automated driving and parking systems available to use. Standard features include Cruise Control with brake function and the front-collision warning system, which is now also capable of detecting oncoming traffic when turning left (in countries where vehicles drive on the right) and pedestrians and cyclists when turning right. The Parking Assistant including Reversing Assist Camera and Reversing Assistant also forms part of the standard equipment roster.

The list of optional features, meanwhile, includes the Steering and Lane Control Assistant, Active Cruise Control with Stop&Go function, Active Navigation, exit warning function and BMW Head-Up Display, as well as the Surround View, Remote 3D View, BMW Drive Recorder and Remote Theft Recorder functions. Existing functions can be upgraded by means of the Remote Software Upgrades facility, which also makes it possible to add new functions (availability depends on the hardware fitted in the vehicle and the market conditions).

The new BMW X1 also treats its occupants to the latest-generation BMW iDrive multi-sensory vehicle experience in the form of the standard-fit BMW Live Cockpit Plus. Based on BMW Operating System 8, it comprises the BMW Curved Display with its state-of-the-art graphics and menu structure along with the BMW Intelligent Personal Assistant that has now gained additional skills. The fully digital screen grouping is formed by the 10.25-inch information display and the control display with a screen diagonal of 10.7 inches. The new BMW iDrive is geared purposefully to providing intuitive touch and voice control. The broad-based digitalisation of the interior enables the number of physical buttons, controls and switches required for operation to be significantly reduced.

The new My Modes combine individually selectable vehicle settings with matching experience worlds for the interior. The Augmented View function is available as an optional add-on for the cloud-based BMW Maps navigation system. An interior camera makes it possible to take snapshots of the occupants or have images of the interior sent to the customer’s smartphone. In addition to this, a Personal eSIM designed for 5G mobile technology, the BMW Digital Key Plus, the BMW ID functionality and smartphone integration using both Apple CarPlay® and Android Auto™ are also all available in the new BMW X1.


All figures relating to performance, fuel/electric power consumption and emissions are provisional.

All of the stated model variants, equipment features, technical data and fuel/electric power consumption and emissions figures relate to the offering in the German market. Dimensions and measurements refer to vehicles with basic configuration in Germany. These may vary depending on the wheel/tyre size and items of optional equipment selected.